Disney Bus Driver Caught on Camera Has No Excuse: ‘I F—ed Up’

At the beginning of February, the local CBS station covered the story of a bus driver who was caught on video spending significant time looking at his cell phone while driving over 60 miles per hour on Interstate 5. He was so engrossed in his phone that he did not notice someone videotaping him.

When he spoke to a reporter in a later follow-up interview, the driver initially denied he was driving distracted, before eventually admitting he ‘f—ed up'. The bus driver reportedly has numerous clients that he drives for, including Disney.

The dangers of driving while distracted by cell phones are even greater when driving a large vehicle such as a bus. Buses are significantly larger and heavier than passenger cars, thus they take more time to come to a stop. They also carry many more passengers than a typical car, and usually aren't equipped with safety belts.

A distracted bus driver who overturns their vehicle or hits a smaller vehicle like a car or motorcycle has a higher chance of causing serious injury or death.

Driving takes a great deal of focus. You have to concentrate on the road ahead, the vehicles in your vicinity, and any potential hazards that might cross your path. If anything happens, you need to be able to react quickly to avoid getting into an accident.

With that in mind, it's easy to see why being distracted by your cell phone while driving can be so dangerous.

Does using a phone while driving take a lot of concentration? 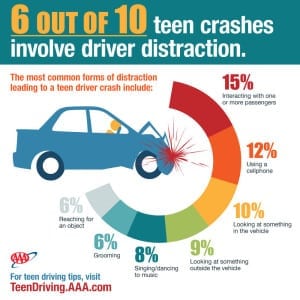 Much like talking to other passengers in the vehicle, talking on a cell phone requires a fair amount of concentration. The more you're thinking about that text message you need to send or what you want to say in your next phone call, the less you're thinking about driving safely. It lessens your concentration on the road, which increases the risk you won't be able to react in time if something happens.

How does using a phone while driving affect reaction times?

Reaching for a cell phone — whether it has been dropped or it's sitting on the passenger seat or somewhere else out of reach — is one reason for accidents involving cell phone distractions. Also, even if you're holding the phone in the crook of your neck, you're still limiting the mobility of that arm, which means you may not be able to react as well if an emergency arises.

How dangerous is taking my eyes off the road, only for a second?

An accident can happen in less than a few seconds. This is especially dangerous in this era of smartphones, where you can stream videos and other media right to a cell phone. Whether you're typing out a text message or watching that cute YouTube video with kittens in it, you're not paying attention to the road. Texting while driving accounts for about 12 percent of fatal driving distractions, and is currently outlawed in 39 states plus the District of Columbia.

Driving while distracted is not only dangerous, but also illegal in many states. If you've been injured in a collision in Orange County caused by a distracted driver, speaking with an OC car accident attorney may help you to obtain compensation for your vehicle damage, medical expenses, as well as pain and suffering.

Timothy J. Ryan & Associates has been assisting California injury victims for more than 34 years and have helped to recover over $1 billion during that time. Those who would like to contact Timothy J. Ryan for a free case evaluation may do so by calling (800) 838-6644. Injury victims have a limited amount of time to file a claim for damages. If you are interested in obtaining compensation, immediate action may be necessary.